The Birth of the Epiran Seekers

Rumors and legend surround the doom that took Epirus. The greatest empire this world had ever known simply vanished leaving scant clues to the nature of the calamity. The Acanthans, the descendants of Epirus, have kept even the smallest shred of insight regarding their ancestors a secret. However, a story so monumental cannot be contained.

Epirus revealed its fate near the city of Saltmarsh when Edard Holmen uncovered an unmarked grave while clearing boulders from his fields. Within the grave, Edard found the bones of a young man clutching a spell book. The book had been enchanted to resist the decay of time as most spell books are but this book was different. This book contained no spells. Instead it gave an account of the last days of an apprentice mage named Gaelin Marram. Below is that account:

This morning the world ended.

I was studying when suddenly something burst through the ceiling and landed in a heap in the center of my room. Through my collapsed ceiling a shaft of light revealed in horrific detail a rotted corpse, twisted and mangled. A stench so overwhelming forced my eyes to tear and my lungs to burn. I was paralyzed with fear and even after Magus Karrna threw my door open I couldn’t take my eyes off it.

Magus Karrna demanded to know what I had done but I couldn’t manage a single word. I just stared at this thing in my room. It wasn’t until the light in my room slowly began to fade that my eyes finally met Karrna’s. Only he was now looking up, his eyes wide and hands shaking. A shadow had come over us.

Outside I could hear screams and loud crashes. The Sun was only barely visible when I looked out onto the city. Once again I was frozen; a horror unimaginable was befalling my home. Clouds of stinking corpses were pummeling Epirus. Heavens save us it was raining death.

Magus Karrna pulled me in front of him and stared straight into my eyes. “Run Gaelin, and don’t stop until you are out of the city!” He had never called me by my first name before. Once again, I couldn’t manage a word. After grabbing what little I could I did as the master instructed, I ran.

The city was in Chaos. Bodies were still raining down, some exploding against the cobblestone roads spraying their festering filth all directions. I tied a towel around my nose and mouth and ducked into an alley. Suddenly the barrage simply ended. Looking up I could see a dark pulsing mist begin to form over Epirus. The fog pulsed and heaved almost as if it were breathing and the sunlight filtering through robbed the city of color leaving only gray. I paused and stared momentarily and then remembered what the Magus had instructed me to do.

I ran without stopping until I reached the south gate. By this time, soldiers were gathering and clearing the streets. One of the guards ran up to me and was trying to force me indoors when I heard it. Like all of the devils of Hell gasping for a single breath an unearthly tone shrieked forth only to suddenly end.

I was dazed and the guard was still yelling at me but I could not hear him. At that moment an enormous blade struck the soldier in the top of the head and did not stop until it exited his groin. I was in shock and covered in blood when a ruddy skinned outsider raised his blade towards me. His oversized fangs only accentuating the joy he took in his grisly work.

I suppose at this moment I accepted that I was going to die. I would be one of the lucky ones and die in the first minutes of Armageddon. Strangely at peace my mind became clear and I remembered Magus Karrna’s lessons. “You’re a baatezu aren’t you?” I asked. My lack of fear must have perplexed the devil as he hesitated to deliver me from this horror. Suddenly, numerous tanar’ri no larger than three feet tall leapt upon my new found friend.

As they struggled in front of me I realized that for as far I as I could see baatezu and tanar’ri were engaged in savage fighting. Epirus was literally being torn apart. Buildings toppled, fires raged out of control, and people were harvested to sate the murderous hunger of the outsiders.

I ran south for as long as my legs could carry me climbing onto a rocky rise that overlooked Epirus. Looking back I could make out the High Lord’s Banner on the edge of city moving north pursued by a host of winged tanar’ri. In that moment the swirling mists that had engulfed Epirus began to churn violently and what began as small vibrations turned into a violent earthquake. Baatezu and tanar’ri scattered abandoning the field as the High Lord’s Palace crumbled and collapsed revealing a colossal beast covered in countless writhing tentacles, pulled tight over its body an eel like rubbery black skin oozed a slimy filth. The creature’s head shaped like the most horrid fish of the darkest ocean was filled with rows of elongated translucent fangs.

The beast paused in the ruin of the palace scanning the shattered city. Demons and Devils alike poured from the city fleeing from what had just risen. Suddenly the beast unleashed an ear piercing roar that was powerful enough to topple the buildings around it. With that it tore east through the city destroying everything in its path and continued in that direction for as long as I watched.

Having seen enough I started to travel south until I realized that the surrounding hills were crawling with outsiders. I found a small cave to climb into and with little else I can do have decided to document what I have seen. I fear that even if the baatezu or tanar’ri don’t take me starvation will.

Tomorrow I will continue south. Most of the Epiran knights are in the southlands dealing with the Yuan-Ti menace. They are our only hope.

Great care was taken to ensure that Gaelin’s grave remain hidden and unspoiled. Who buried Gaelin and how he ended up so far from Epirus is a mystery. Divination magic has proven these artifacts to be genuine but too much time has passed to tell little more than that.

The fate of Epirus and its people is a story that cries out to be told. It is for these people and in honor of Gaelin Marram that the Epiran Seekers were formed to find the truth. We do not seek fortune or glory but rather strive to reveal a history lost and ensure that such a cataclysm never happens again. 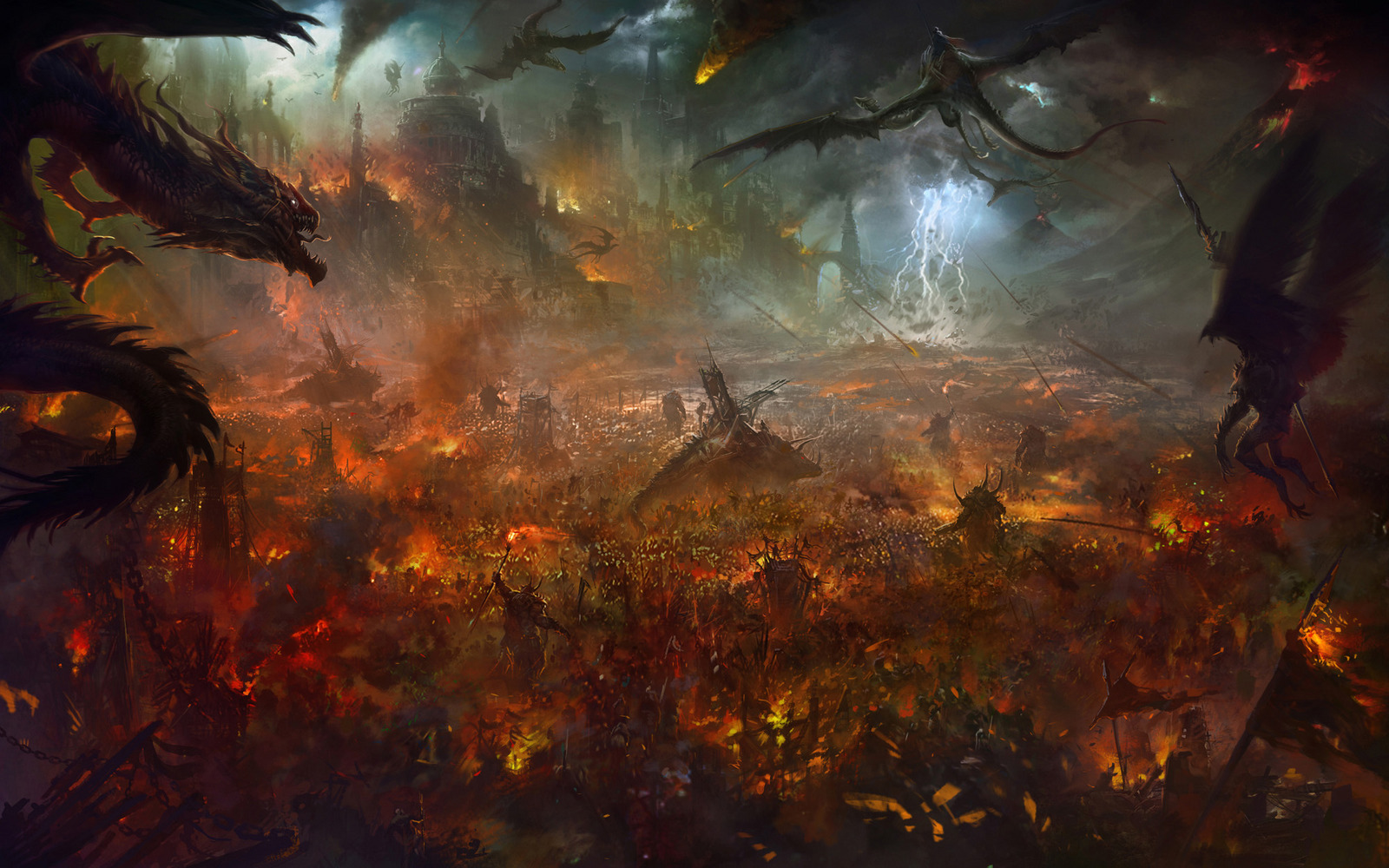 Congratulations to you and your team for winning CotM. I really loved the interview and of course, have loved the campaign for the last couple of years. I hope all your players get a kick out of it and those who have not been able to experience it before are drawn to it now.

The party was separated from the book a while so they haven’t been able to decode any new entries. Hopefully, they will get back on track soon.

It sure does what you say, but it seems you may change something after Kallak’s comments. I have to say that from a design perspective I agree with him about the double dragon imagery of banner and picture, although it probably doesn’t irk me as much. However, I look forward to seeing what you might do. The banner is so effective and the picture is so good but to crop the dragon out of the picture may make it a bit lame. As for the OP Dragon on the top, in some way, I feel this is an important OP stamp that should remain on every campaign and yet I agree with Kallak that, in your case, it conflicts with the dragon image on the banner.

I am sure you will figure it all out…….

Thanks, I wanted something to convey the overwhelming destruction of Epirus and I thought it was just perfect!

Love your MAIN PAGE Dragon Picture, by the way!

I'm sorry, but we no longer support this web browser. Please upgrade your browser or install Chrome or Firefox to enjoy the full functionality of this site.